This of course assumes that you believe in me as being an Expert in Social Media… Which of course I am not, but that never seems to stop anyone these days.  I mean anything you read on Social Media sites has to be the truth right? Welcome to Another Considered Normal Rant.  Todays Rant brought to you by Facebook, Spreading Misinformation and Terrorizing the Nation since February 4th 2004.

Now before I get started, please note I do not blame Facebook, just like I don’t blame Fox News, or any other Media outlet (Other than shitty Satire ones that LOVE to stir the pot), they simply, inadvertently, provided the outlet for misinformation.  I blame the people, and for once I can’t say its the Younger Generation, because today I saw two people from my Generation, making comments that just blew my mind.  Being a Tech in the industry (albeit not in the phone business, but in the IT business in general) I see a lot of misinformation that I can instantly pick out and dismiss, I call this common sense because in some cases it doesn’t take being a Tech to realize your being duped.  And not only the Users are at fault, but there are those who knowingly feed on these people gullibility to spread their misinformation.  That will be the second part of my rant.

So what is this rant about?  What sparked my rage today?  Facebook Messenger… That’s right, somehow this is still a hot topic…

Now as I had said, this is old news, Facebook made it permanent ages ago, and I even had a chat with some of the instructors at m,y work about it as they deal with several people a day asking questions about mobile apps and social media.  Now before I get into too much detail about this, because later in this rant I will post the REAL reason behind the permissions, not the BS this news show decided to spew… Lets just take it at face value… And look at similar apps that no one has ever questioned… Below are some snap shots of popular social media apps and default phone apps… See if you can spot the similarities:

Notice how all of em (Except Twitter, which doesn’t have an audio feature) have the EXACT SAME permissions as Facebook Messenger?  Ok now, as an experiment…

Experiment #1 in Social Mindless Zombies
I wanna see how many people will believe what I have to say next… As an “Expert” I want you to turn off your phone, never turn it back on, because even the base apps (like Google Camera) Have these same permission that allow anyone and everyone to record when you singing to the radio and take pictures of you in the shower… No phone is safe, every company in the world wants to know what underwear you are wearing at every second of the day… Your phone is not safe… In fact, I am looking at you right now… Yes you…

Are you still with me? If you are, maybe I can save you after all.  If you saw through that bullshit, maybe just maybe we have hope of overcoming the mindlessness that can be found on Social Media sites world round… Now for the fun stuff, the reason all these apps have these permissions. Note this copied from an email I sent to the instructors at my office, it was copied from an article I cannot find anymore.

Change the state of network connectivity – does NOT mean that Facebook can turn your data/cell service on and off as it pleases, but means that you’re giving it permission to use data in case you have a limited data plan. Since you can post, send messages, phone and video call through the Facebook app, you don’t want to suddenly end up with a $800 data charge.

Call phone numbers and send SMS messages – Exactly what it says. This does NOT AT ALL mean that all this info is going back to Facebook. Again, it has to do with incurring extra charges. You can download different SMS or dialer apps if you don’t like the one that came with your phone. I use one called hello SMS that asks me for the same permissions, the developers are not intercepting or stealing my phone numbers and texts.

Record audio, take pictures, and record video at any time – No, no, no, this absolutely does NOT mean Facebook has access to ANY of these! Again, the operating system needs permission to access the hardware resources on the phone so you can use these features. A similar situation could be a theft-deterrent app that could snap a picture if someone enters a wrong password 3 times. It would need the same permissions to use the phone’s hardware to do certain tasks. Any app that needs access to the camera will ask this.

Read your phone’s call log, including incoming and outgoing calls – Same as the call and SMS warning, if you change your dialer/SMS app it needs this permission to carry over your history from the old app to the new one so you still have your recent call history, or old messages. Nothing malicious here.

Read your contact data, including who you call and email and how often – See above. Facebook also provides an email address, so if you have email addresses attached to your contacts, it gives permission to auto-fill the email address if you start typing the first couple letters. Facebook has billions of users, they’re not going to comb through billions of people’s email for their “personal gain”. MANY sites, including Google, use tracking cookies to see which sites you visit on a daily basis so they can show you ads that you might be interested in. This is how most free sites make money, through ad referrals when you click on them. This is nothing new.

Read personal info stored on your device – Facebook is a social service. This basically gives the app permission to hook into things stored on your phone, IF you choose to upload them, such as pictures, videos, location information, etc. That sort of thing. Also, if you’ve given any personal info on your Facebook profile already, getting up in arms about this clause is a bit ironic.

So as a techie, and understanding this, as well as you know, doing some basic reasearch (look up “Facebook Messenger Permissions” on Goggle, you will get a similar article like this one: Misplaced fear about Facebook Messenger for Android) you can understand why when someone posts something like this on Facebook (note: Identities have been modified to protect the gullible): 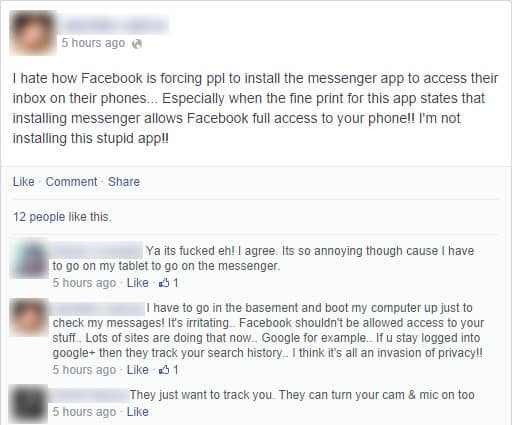 It just makes me wanna “Face Palm”… How could my friends be so gullible?  Has the idea that you must have facts somehow disappeared?  Is this really how we get our “News”, by reading our Facebook Feeds and instead of researching the info, we simply share, not only the misinformation but our misguided view on the subject as well. You remember the old adage of “You can’t believe everything you see on TV”?  Why have we forgotten this? Why havent we made the obvious leap to “You can believe everything you see in Social Media”?  The way its present has been changed, but the crap info hasn’t… which brings me to Part 2 of this rant…. Wait… Forgot an image or two…  Mr Newscaster… Yeah the one that said in the video that Facebook Messenger has only 1 start in the App store and “Similarly” in the Play Store…  It took me all but 5 second to look  this Up…

Here is the App store which shows only the Current Version: 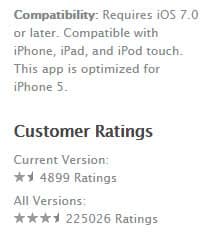 It still holds a 3.5 star for earlier versions… Now it also only shows 4899 Ratings for the current version… Let’s take a look and see if this hold true for Google’s Play Store: 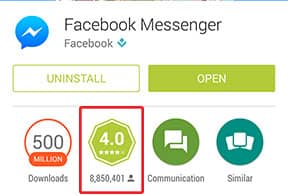 8 million users on Android give it 4 starts… That’s more than Apple’s combined 229.925 votes.  Which makes me believe that anyone who knows what the fuck they are talking about, owns an Android phone, and everyone who believes “The Hype” and every other piece of shit they read online, has an iPhone.

Ok, now on to Part 2, now that I am done shaming Fox29’s shitty choice in “Experts”

This is a tricky part, I mean its obvious that people are at fault for spreading the misinformation along with their misguided views.  And don’t think that this Messenger issue is a one of kind instance.  It just happens to be the subject that got my goat today.  But it’s not only the people, they have help, from those who like to stir the pot… Take for example the recent Betty White incident… Where a Satire Website posted the following:

Now I have not linked it because the site doesn’t seem to respond, why I can only speculate, more than likely due to a surge of hits as people rush to see the site after every other news agency covers the story stating she isn’t actually dead… Hello Publicity Stunt for the Satire Site… Or maybe it was because of all the backlash of angry readers who misread “Dyes” and thought she had Died (I am at fault for this myself… I mean she is in her 90’s, it wouldn’t be a shocker).  In any case, Empire News did what it set out to do, get massive viral hits from Social Media by spreading misinformation with a misleading title.

So the New Age Media seeks information from misguided “Experts” and broadcasts misinformation to the masses, which in turn causes mass hysteria on Social Media everywhere…

In the case of Facebook Messenger, people are lead to believe that the app is somehow invading their phones and can activate their camera at any time and “Smile, your on candid camera” (You sang that just now didn’t you… I heard you through your phone…) and people freak out and post if all over Facebook in an outrage, not realizing that every app they ever installed has the same permissions, even every pre-installed apps.  The fact that the app needs permission from the OS to use these features on the Users behalf just seems to escape their minds, replaced with misinformation.

In the case of dear old (and funny as hell) Betty White, news of her “Death” hit Twitter like a mad storm…

In any case, Social Media has made us all Stupid… ever last one of us… I at least search for a second and sometimes third source before I pass on some dumb witted shit with misguided views… but every so often one slips by… Like Betty White for instance… The other night I told my Roommate she died, then looked it up and saw I was wrong.

This mass hysteria issue of Permissions is not to be mistaken with information browsers and companies do collect, which again si another storm of misinformation.  For instance Google Chrome does track search history patterns, which allows them to customize your search experience, it does not keep track of the actual sites, nor your contact info, phone number, address, etc… It simply captures key words, all of which can be cleared by clearing your settings from time to time… And no, they can’t Turn on your Web Cam and take pics… “Smile, Your On Candid Camera!” (You sang it that time, I know you did, I heard you through your microphone… )