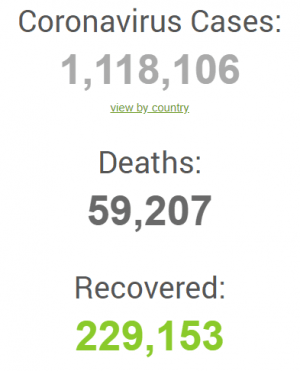 Well, today marks the 3rd week since I left my home in Montreal.  Yesterday (Thursday) the world passed one million reported infected.  A small number compared to the 7.5 billion world population for sure, but the shear rate at which this virus has spread is astonishing.  In my last post I mentioned a video which had data from March 15th, a few days after I left Montreal, when the world had just passed 150k infected.  It took 3 months to get to that number, now almost 3 weeks later, we have risen by more than 850k, with over 100k reported today (friday).  And we have not hit our peak yet.

One of the topics that keeps coming up is how deadly is this virus, really?  As mentioned in my last post, all we have to go off of is the reported data… Which to be honest, isn’t near the numbers of actual cases.  In some countries where wide spread testing has begone, it is being found that a high percentage of those tested were not showing any symptoms.  In countries such as here in Canada, and provinces like Ontario, they are not testing unless the person is showing severe symptoms.  So the numbers of infected could be much higher in Ontario.  This idea that many who are infected are not showing symptoms, and are most likely to recover, could heavily skew the numbers to the positive, bringing down the mortality rate.  There is also the fact, that one of my colleagues pointed out, is that the rate at which people pass away due tot he virus, is usual much quicker then than the length of time to recover, will also skew the results to the positive.  This beings a bit of hope to my weary heart.

In my last post I also mentioned that the the current calculations were wrong, I recently read up on one for the sites I visit for the daily stats, and they mention this fact as well:

A precise estimate of the case fatality rate is therefore impossible at present.

And give a more in-depth method of calculation, which unfortunately brings us no closer as it involves estimation. The correct formula, to lengthy of an explanation to just copy and past here, can be read over at WorldMeters.info

On a more personal note, these last few days have been taxing.  I have dealing with degraded internet due to the masses of people flocking online in their now infinite spare time, which has 1. affected 1. My ability to blog, and 2. My ability to work from home.  Today I had a long battle getting a hold of Bell Canada to have my cell provider switched over to a more reliable network, as I have been getting zero to one bars of signal out here in the country.  Bell has a tower a block away that would definitely give me a little boost, and a lot of data so I can plug back into my daily work. But Bell being Bell, this was a challenge.  For one, I do not live in Ontario, I live in Quebec… however trying to get a sim card shipped to Ontario for a Quebec card has a good chance of being flagged as Fraud… so I had to battle this hurdle, among many others, spending over 8 hours on the phone, dealing with agents or being on hold.  And I am not even sure if they got my oder correct… I will be calling back tomorrow to verify the details of my account.

But I am not the only one feeling the strange effect of the situation.  My boss, a man whom I look up to in times like these, has always been the cool headed guy, always on the level and always out to lend a helping hand if needed.  Today he expressed, that for the first time during this crisis, he has started to get anxious over the whole ordeal.  This is a man who has been rock sold for the 3 years I have known him, to see the look on his face was heart wrenching.

My best friend, whom I am currently residing with, had a Zoom Conference with the rest of his family up in Ottawa. With rules of social distancing getting more strict, it is harder and harder for families to connect.  What once would have been a weekly dinner with the family under one roof, has now turned to video conferencing and checking in on each other to make sure they are healthy and that they are staying away from other people.

Even stores that are able to remain open are not taking chances, asking you to order online and utilize curb side pickup, where you call the store upon arrival and they bring the purchase out to you, being careful to keep at a distance.

Is this our future?  Limited human contact where everything from education to groceries to pet food to car parts goes strictly online… no more browsing in a store, call and make your order and they will bring it outside or deliver it to you with no real human contact.  I would hate to see this become the new norm.  But then again… will anything ever again be considered normal?