It’s rare I come across something so messed up that it makes me say WTF (“What the F*ck” for those who do not know abbreviations very well). Today is one of those rare occasions.

The list is in chronological order (the order I came across them) and not based on their WTFness (level of WTF).

I came across a post on Facebook (of all places) which contained a link to a site with the title “NASA SCIENTISTS ADMIT THE FACT – THEY FOUND HEAVEN – GOD EXISTS – LOST CITY OF ATLANTIS FOUND“, the site only contains two posts, the first entitled “EXPERTS FIND GLASS PYRAMIDS SUBMERGED IN THE BERMUDA TRIANGLE MYSTERY” which tells a poorly spun tail of how crystal pyramids, larger then the ones in Egypt, reside under the Bermuda Triangle. One of the quotes is as follows:

”There is some suspicion that his pyramid was either a holy center for the lost city of Atlantis or the power plant for an ancient civilization, and that passing vessels may be affected by its energy field, which some refer to as the ‘quantum vacuum,’” adds Miami-based archaeologist Dr. Jane Harmony.

Now I did a search for “Dr. Jane Harmony” as the first thing I do when I read something that should have hit the news in a big way, is to verify from multiple sources, that the facts are indeed real… all I came up with was 4 entries, and surprise surprise, she seems to only exist on this site or sites referencing it. I then did a search for the general topic and found a slew of websites pertaining to these crystal pyramids, some had a “photo” to add “proof” to their claims (see blow). 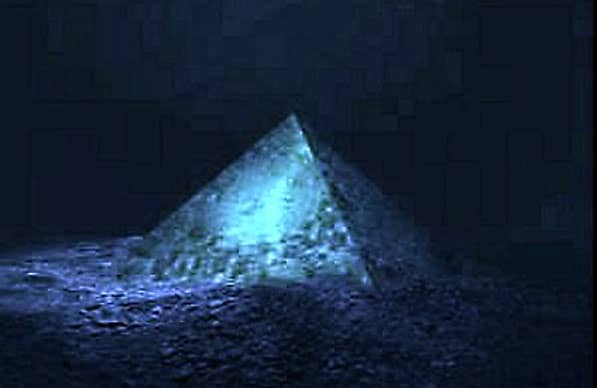 Now this seems more like a computer rendering than an actual photo or sonar reading.

After a few more searches I came across a site that had the same line of thinking as I did, but will will come back to that after the second WTF article.

The second article on the page was “NASA FINDS HEAVEN — SCIENTISTS ADMIT – EVIDENCE GOD DOES EXISTS IN SPACE!“, the following quote is from the bottom of the article:

“The transmission lasted about 10 minutes. When it was over, I felt a bit embarrassed because I found my face was soaked with tears of euphoria. Then, looking around, I saw that everyone else was weeping copiously too!” As the observatory staff discussed what they’d just experienced, they found that they were certain of only one thing — the signal could only have originated from a divine source.

“As scientists, we are supposed to require hard evidence before taking something as fact,” says Dr. Lucille Gherkin, another Mcdougall staffer. “So it’s difficult for me to admit this, but something in that transmission told me — told everyone who heard it — that it was a message from God himself from his abode in Heaven.

“The transmission came from a point near the center of the constellation Sagittarius, from a source about 100 light years beyond the furthest star in that constellation.

“So now I believe we know where Heaven itself is located.”

What really gets me is that this is a quote from a Scientist… really? A person who thrives on proving things with fact and evidence in a scientific manor, simply listens to a signal from space and their first thought is its Heaven? Not some extra terrestrials? Or anything else for that matter… And everyone in the station agreed… I am sorry to say but that seems a little far fetched… I mean at any given time, if you take 10 to 15 people in any profession (other than one that requires a specific faith) not everyone will have the same beliefs.

Again I did a Google search, which came back with a plethora of links that all claim that the Hubble Telescope had photographed Heaven back in the 1990’s (see below picture). Now I understand that this is NOT the same thing as above, in fact I couldn’t find anything with the exact topic as the above article, which again pretty much proves it to be fake, I mean a recording from the heavens and it didn’t leak onto the net? No sloppy government cover-up?  Nothing… absolutely nothing. 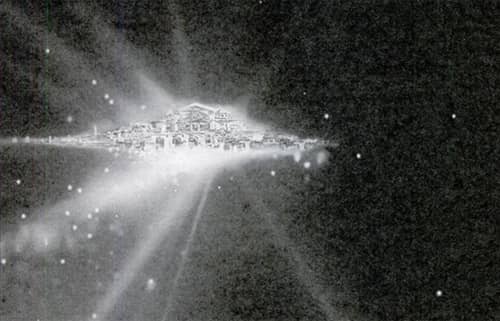 Photo Takes from this article

Now its of no surprise that both these topics (and all other instances there of) were primarily found on loosely religious based fanatic sites.  They seem to pray on the people I consider “Religious Nuts” or people just to gullible to know better.

As mentioned I would return to a link to a site that had the same thinking process as I did, I found the following article – “The Cosmic Glass Pyramids of Doom” which talks about how outlandish the idea of the crystal pyramids is and how the lack of proof and actual names makes it look even more unrealistic. After reading the article I decided to check out the main site and see what else this blogger has found. The next WTF article was entitled “The Masonic Red Cross vampire conspiracy“, yes that’s right apparently some people out there believe in such a conspiracy. 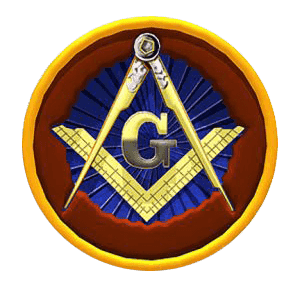 They state that very little of the blood donated to the Red Cross actually goes to the people in need, and in fact it goes to certain secret societies for their rituals… The article also lead me to my fourth and final WTF moment….

Wait, what? Downloadable medicine? After reading about the Masonic Red Cross conspiracy, I clicked on a link leading to another article entitled “Quantum downloadable medicines!“, which speaks about a site that claims you can download medicine right into your brain from online… 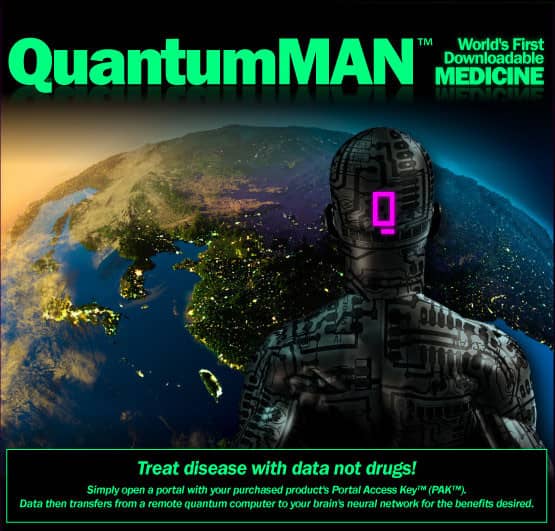 I actually went to the site itself to read more (To me this is the Ultimate WTF). The is called QuantumMAN™ and states that their treatments can be downloaded and administered via a PAK™ (Portal Access Key). The site even has clinical trials. The first clinical trial listed is for Back Pain, here are some snippets from the study:

Purpose:
To test the efficacy of “QChiro™ Quantum Chiropractor” download that claims “to align your entire skeletal system with precision”.

QChiro™ utilizes a “Portal Access Key™” that is downloaded to your computer, smartphone or tablet. The Portal Access Key™ unlocks a quantum portal linked to bioinformation that is then allowed to flow from ZAG’s quantum computer via quantum teleportation directly to the neural network of the subject’s brain. The data provides physiologic directives that result in an immediate and perfect alignment of your entire skeletal system.

Really? Seems a little Sci-fi for me… Here is the rest of it…

Procedures:
A Portal Access Key™ for QChiro™ was downloaded to the physician’s personal computer. The female subject was then instructed to click on the Portal Access Key™ and confirm the upload was to proceed. She was then requested to lie on my exam table face up for 5 minutes with her arms to her side. A small pillow was provided for her head. Following the 5 minute rest time, she was requested to sit back up in order for her back to be re-examined.

Findings:
Re-evaluation with kinesiology revealed that her back was now properly aligned. The palpatory exam then revealed that the areas marked with an “X” were no longer palpably tender further indicating that the lesions were corrected. The subject also noted that she no longer experienced discomfort in her mid and low back regions even with rotation of her torso.

Conclusion:
The uploading of bioinformation via a “Portal Access Key™” that accesses QChiro™ data did, in fact, re-align the subject’s thoracic and lumbar regions and provide relief of her presenting complaints. The product’s claims were therefore confirmed and validated.

UPDATE
I decided to check out some of their videos, the voice you can tell has been modified, not sure if that was to make it seem more computerized or to hide the persons voice to prevent identification… either way, seems really creepy and shady…


And thus concludes my post about the weirdest sh*t I saw today (and my day is not over yet either….)