Yesterday Montreal announced that there were 149 new cases bringing the total of cases in the city to  1361 which accounts for almost half of the cases reported across Quebec at the time (2840).  Of the 1361 cases, 82 are healthcare workers, the front line that we rely on to help us through.

I am glad that I left the city before this all happened, but I still have friends and co-workers in MTL that I keep in contact with and make sure they are still healthy and doing well.  This virus is just starting to grab hold, I am hoping that with social distancing, and other measures being put in place at the municipal, provincial, and federal levels will hopefully start a decline in those affected.

Some other videos of note, before I get down to my thoughts for the day.  One of the channels I watch on Youtube, MinutePhysics put out an interesting video on trying to figure out where we are going.  Its only a few minutes, but it’s a good watch:

Now on to my thoughts about another video, and how the stats are being presented.  I watched a video (you can see it below) from Ninja Nerd Science, and although a lot of the video is way over my head, as it goes deep into medical jargon, he talks about the mortality rate, and to be honest, I do not like how they are reporting it.  Watch that part of the video (or watch it all if you like, I have queued it tot he part I am talking about) 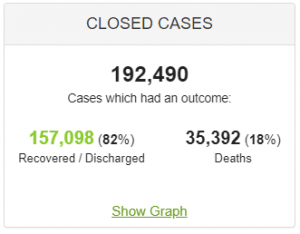 Now, why am I saying that dividing it by active cases is the wrong way to go about it?  Lets use a metaphor shall we.  Take 100 cars driving down a road, at the end is a “T” intersection, You can either turn left, or right.  Now the first 10 cars have gotten through the intersection, 3 turned left, 7 turned right.  If you use the calculation that everyone is using, that’s 3% of the cars will turn left.  But what about the 90 cars that have yet to make a decision?  Now you might argue, that that 100 will increase to 1000 cards and once that 100 cars get through, it may turn out that 30 turned left and 70 turned right… still at 3%… Then you get to 10,000, and those first 1000 got through the intersection, and only 300 turned right, and 700 turned left, still at 3%… Ok, your right… but at some point, the number of cars on the road will stop increasing… say it stops at the 10K mark, 9,000 left to go as 1,000 are already “resolved”… currently at 3%… now for the remaining cars, lets say it keeps the same stats, for every 10 cars, 3 turn left, 7 turn right… that is not 3%, it’s 30%.  This is where the process is inherently deceptive.  You cannot take into account the cases that do not have a resolution.  In doing so you will dilute the results giving a false sense that the numbers are low.

So lets take a look at the stats they way you should… resolved cases… now world wide, we are looking at 18%, now this number itself is inherently deceptive on its own, as you have to keep in mind, these are reported confirmed cases, it does not include the many who are turned away from testing due to 1. not meeting the criteria, and 2. Lack of enough tests for everyone.  It also does not include those who have died in seclusion.  So these numbers are more than likely a bit higher.  But lets take the value at face value for what we have.  So globally we have 18%, but this does not reflect each area equally. 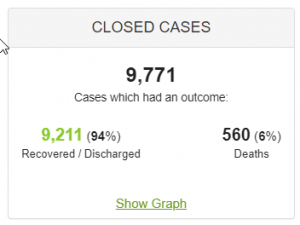 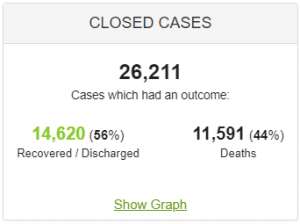 Now you have to understand, these are only based on the current resolved cases… These numbers are not final, and could go either way when the rest of the cases have a resolution.  But including those unresolved cases in the calculation, is not a proper way to tell you the mortality rate, it only gives you the percent of total cases that have passed on, which is not the same. 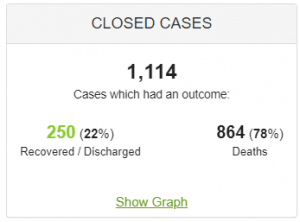 The reason I say that these numbers are not final, and that they can change, is that, as of 2 days ago, the Netherlands had a mortality rate of 100% with only 3 recoveries and over 650 deaths.  Today they have 250 recoveries, and 864 deaths which has brought down the mortality rate to 78%… still a hell of a lot higher than the global 18%, but getting better as the rest of the cases process.

At this point, as the virus is still developing, that actual and trued mortality rate cannot be define.  It can only be guessed at based on the reported numbers and reported resolved cases.  Even the Spanish flu’s mortality rate is up for debate as it is said it killed anywhere between 17 million an 50 million.  The truth is, the mortality rate is not 3%, it’s not 18%, it could be much higher or lower, we still cannot tell at this point… but currently, with all the current resolved cases, we bounce around at 18% give or take a few percentages… Some countries like Germany have done a good job at recovering, where places like Italy and the Netherlands have been having a bit more trouble.

And my current home province of Quebec… we are starting to see a rise in infected especially in my current home town of Montreal… I pray for all those back home and hope they are well.  Stay safe everyone… but get used to the new normal… if it can even be… considered normal.