As of August 2nd of this year, I will be officially streaming on Twitch. Thanks to a close friend of mine, Danielle Allard (website, twitch) who has given me the confidence to get this up and running. I have been running Revelnoded Gaming for a few years, but only posting the odd video to Youtube. Now I have expanded to Facebook, Instagram, and Twitter. I even opened up a Discord Server.

On my premier stream this Sunday, I will be streaming Marbles on Stream which is a stream community game allowing twitch viewers to join in and partake in the races. Some of the prices are up for grabs are Skulls (Loyalty Points) and 2 PC Video Games (taken from this list) The Loyalty points can be used for an assortment of rewards, including joining me in some of the other games I stream (joining the game itself). 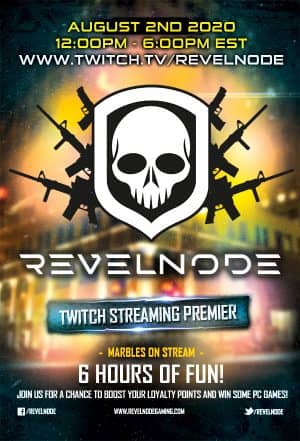