It’s strange stepping out onto my friends back porch… the only noise you hear are the distant transports and the Canada Geese flying above… other than that, complete silence.  Inside, my friends wife is keeping up to date on all the Covid 19 news videos on YouTube, and catching up on articles posted throughout the day.  Almost 900 confirmed cases in Canada, 257 of which are in Ontario.  Although it does seem to be slowing down a little in Canada compared to predictions, it’s still not over.  Militaries around the world are prepping for the worst.  There are rumors of the possibility of Martial Law and other military actions starting to brew on the net. 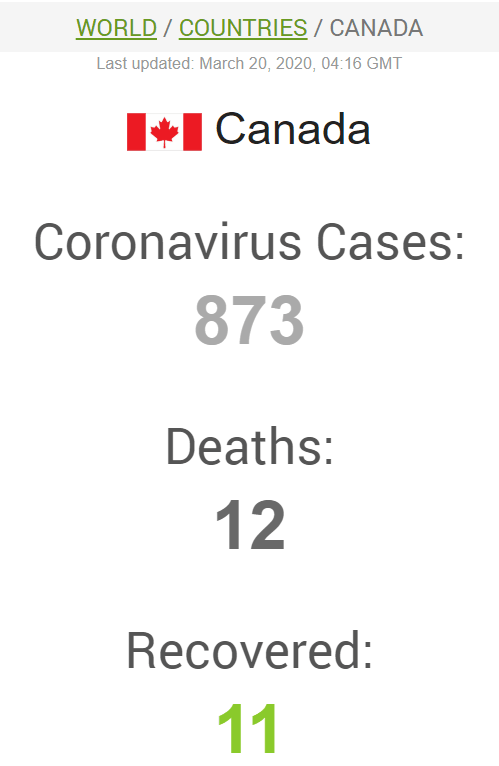 It is a scary time indeed.  There are so many possibilities on how this can go… we could wake up tomorrow and there could be no new cases, or we could wake up and find the death toll has tripled and the number of infected has spread like wildfire.  The news agencies are no longer saying those in power are trying to stop the spread… instead they are now saying that they are trying to slow the spread of the virus, as there does not seem any feasible way to actually stop it.

Trying to slow it down is no easy feat, but it is something we need to do.  We need time to manufacture more tests as many places are running out of testing supplies, we need time to process those in critical condition without flooding the hospitals with more cases.  We need to try and keep healthy.

Just the other day the amount of active cases vs closed cases was about the same ~85,000, however I look at the stats today and see that the amount of open cases if about 50% greater than closed. 147,180 open cases, and only 98,490 closed.

The numbers are every increasing, and even though it seems to slow in some places, in others the stats are increasing at exponential rates.

Two web sites that I keep track of, are Worldometers.info and John Hopkins University and Medicine which are two sites that are keeping track of the data reported by each country.

The part about this that scares me, is that these numbers are not the final numbers… these are the numbers of those cases that have been reported.  What worries me is the number of unreported.  Not just of those who have not gone to seek help, but also those who have gone for help, but were turned away because they did not meet the strict criteria for being tested. The criteria used to be that if you had traveled or come in contact with someone who traveled and were showing symptoms.  At the time of this writing, the criteria is as follows:

It does not account for community transmission or possible carriers (those with mild or no symptoms), and as stated in the case definition document:

3. Other exposure scenarios not specifically mentioned here may arise and may be considered at jurisdictional discretion (e.g., history of being a patient in the same ward or facility during a nosocomial outbreak of COVID-19)

So people who do not fall under the above definition, who may have contracted it elsewhere other than in travel or contact with a traveler, are at the discretion of the testing facility.  So there could potentially be a lot more infected.

The world is in a bad place right now, and I do not see it getting any better any time soon.  For now I sit at my desk in my friends basement, “working from home” to keep my bills paid, listening to the news, and watching movies.  Not much else to do when self isolated.  Just hoping that someday, things will get better.  The problem is, right now, nothing is… considered normal.

Till next time, I hope that this post finds you well and in good health.