As I look out the window of my friends shop at the 401, seeing nothing but Transports going back and forth, I have but a glimmer of hope that this will all blow over.  The shipping industry is still moving, so it cannot be that bad… Right?

The problem is trying to gauge the affect of something that we, in our life time, have never dealt with.  A pandemic this size has not been seen since the Spanish Influenza pandemic of 1918.  We should know better right? Except this is not 1918, and this is not the flu.  We are more advanced now, medically and technologically, so why is this such a threat?  Maybe it’s because we are too comfortable in the idea that we are so advanced, that we think we are indestructible?  You would think that we would have had measures in place to contain such an outbreak… So why are we so stupid with handling this?  What could have been done to prevent this?

From the start this whole situation has been mishandled, from China trying to hide the initial outbreak till it was to late, to President Trump believing that, as if it were a flu, it would just disappear come spring.  From Provincial Ministers like Doug Ford telling everyone it’s OK to travel, go a head and enjoy a vacation, to Presidents and Prime Ministers concentrating on closing their borders while doing nothing to prevent the spread of the virus that has already entered their countries. 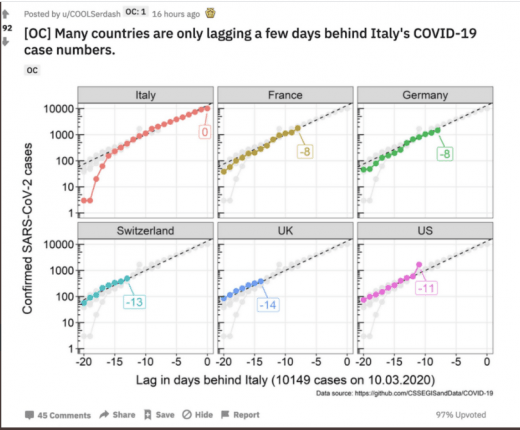 This is what has gotten us here to this point.  over 180,000 people worldwide have been infected, almost 7,500 dead.  It is predicted that the United States is only a few days behind Italy, and it does not look like it’s going to calm down any time soon.

What gets me the most, is how poorly this was handled… I remember that the news was telling us that if we were not sick, we should not wear a face mask, but if you were sick, you should… The problem is the sick aren’t wearing masks, half the people don’t even know they are sick till it is too late… So the spread worsens. They are still telling people to go and enjoy the outdoors and go visit your grocery store… But yet they are telling people to avoid large gatherings and crowded spaces.  The virus is supposedly able to survive in the air for up to 3 hours… So lets all go out side and to the local stores to breath in the air that some unknowing infected person coughed into 2 hours earlier.

3 months in and we still have no idea what we are doing? Officials are making decisions on the fly that should have been done long before the virus spread around the world.  Quarantines were not put in place in time, ability to test people was hampered by the regulations put in place to limit who could get tested and how.

It’s only going to get worse, and I am not talking just about the spread of the virus.  I am talking about the aftermath.  The global economy is already stating to fall, the stock markets are being slammed, and the markets have to close after being open for less than an hour because the drop was too much for the market to handle.  Local business are already going bankrupt, workers being sent home for 2 to 3 weeks, loss of jobs for many industries.  Even if the virus gets under control now, we may be too late to return back to what we were.

But then again, as I look out at the 401, and see the trucks moving back and forth… I still have hope that we might make it through… But as the days go on, that feeling dwindles.

I never thought my first real blog post of the year would be about this.  I had place to do a lot more technical articles, but currently this is all that I can think about.  I hope that all of you that read this are well, and that you will make it through this unscathed.