As the days go by, and the effects of isolation set it, I find it harder and harder to do anything.  Seeing the new today that the number of confirmed cases almost doubled in Quebec over night, and news that Quebec is shutting down, I realize more and more my decision to leave the city was the best decision to make.  We are weeks, if not days away from Martial Law being enacted and all because a small few have decided for themselves that partying and having fun is more important than the health of the country.

I called my mom the other day… those who know me know that that is a rarity.  My mother an I have a complicated history, one that got worse after my father passed over a decade ago.  But she is my mother, and she has the right to know that I am OK, and I wanted to make sure she is ok, as over the last few years her health has deteriorated.  I urge all of you, no matter your relation with your family, call them, make sure they are alright, let them know how you are, as this might be the last time you get the opportunity.  I know that sounds somber and dark, but these are dark times, and I, like my mother know, that if she catches this, her chance of survival is near nil. 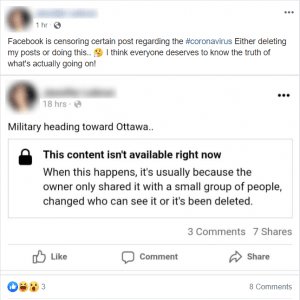 Facebook is starting to censor posts.  A friend of mine reposted a video of military trucks being seen on the road (APCs, Hummers, and Transport Trucks) coming up the 416 towards Ottawa… that video has since been removed.  It is not often you see the military moving so many resources just for the hell of it.  They are preparing for the inevitable.  Nothing is off the table at this point.

Canada is seeing a sharp rise in confirmed cases, and it’s only going to rise as not everyone is taking this epidemic seriously. 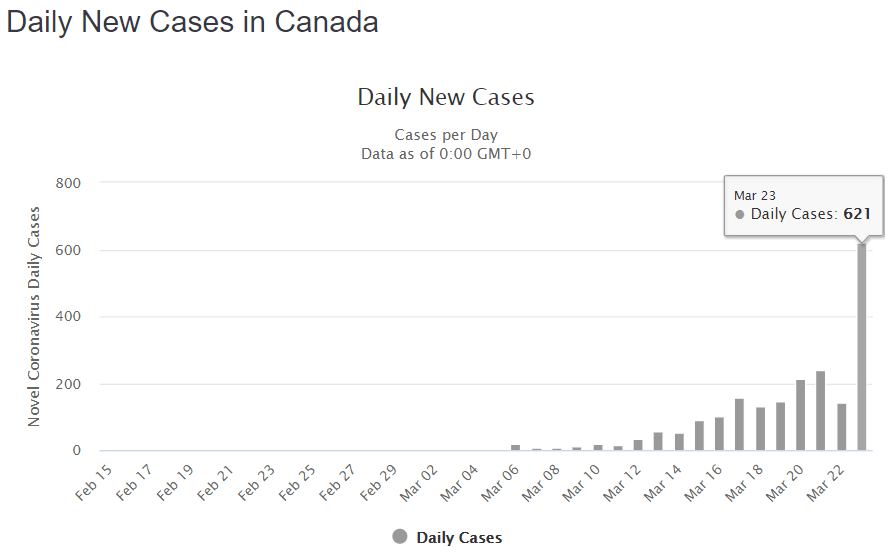 Until people take this seriously, and start to listen to the recommendations, the numbers will just keep increasing, and eventually the government will have no choice but to enact Martial Law, and heavily fine those who disobey curfew/quarantine and possibly jail the more serious cases.  This is no joke.  Please stay safe.