Ok, so no I have not been living in Montreal for 10 years, but my domain name “ConsideredNormal.com” was registered 10 years ago on April 14th, 2018. 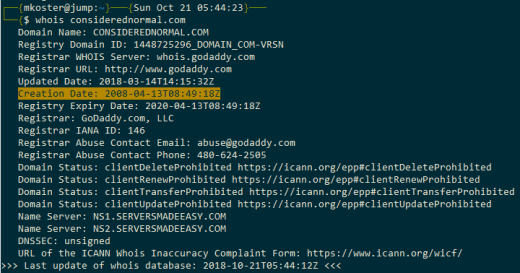 A screen capture of the WhoIs lookup for ConsideredNormal.com

Back then I started a blog to process my feelings over a break up that had really affected me. It was used as a tool to express my feelings in a way I could not through normal means. After a year I tried to make the site into a webtoon, but that didn’t fare well. My toon was based on photos I took, but I just couldn’t get into scripting… my mind just wasn’t in the right place, as this was just after my father passed.

I had turned it into a blog again like it is today, but I had switched the domain from being a WordPress blog and pointed the domain towards Tumblr for a little while, which, to this day, still mirrors all my posts and photos.

However in late June 2012, 6 months after moving to the island, I once again started a WordPress blog.  For the most part, my site was just writing about life in Montreal, but there were a few tech posts that really made things take off and put Considered Normal on the map.

On July 30, 2013, while working at the Atwater Library and Computer Centre, I ran into an issue while imaging several systems in their computer lab.  After installing an image created by windows native SysPrep, the computer refused to boot.  I searched the web high and low and found an answer buried deep in the forums.  As it was hard to find the answer, I decided to write about it, so that others could find the answer much more easily.  It became one of my most popular posts, hitting an all-time monthly high of 1,286 views two years later.

The following year, on September 9, 2014, after hitting another issue in the computer center, where I made my virtual hard drive a little too small, I searched for documentation on how to resize the drive.  After reading several articles and finally finding out how I wrote another tech article detailing how I succeeded.  This article, which is still popular today, hit an all-time high of 673 views back in October of 2016.

The monthly hits for my post about resizing Virtual Hard Drives

These are just a few of the articles that made my site reach over 3,000 hits a month over the last few years. I know 3K views is nothing in the world of social media, but for a small time blog, that’s quite a bit considering the blog was supposed to be about my thoughts and rants…

So for the 10-year anniversary (I know I am late by a few months) I have decided to update the skin of the site to be a little more “fun”… at least it looks that way to me… a bit cleaner anyways.  Still working on a few kinks here and there.