I can’t believe I let my blog slide.  I have been so busy over the last few months I haven’t had a chance to sit down and write a good long post. So here it is, my First post of 2016, wishing everyone a HAPPY NEW YEAR (a few days late) and I will start the new year with a little Year in Review post. 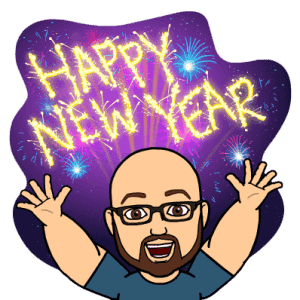 Now before I get into too much trouble.  Yes I am using my Bitstrips Character for my logo and images… I mean it looks just like me, what better way to add some flare to my site.  So new this year you will see more of this lovely cartoonish face of mine.  You should also see some more posts… I mean 3 months, Srsly… It took me 3 months to make a post… But then again I have been busy with work and some personal project I will get into later on in this major post.  So without further ado, here is the Year In Review for 2015…

2015 was a great year, just before the year switched over I got my job at a Data Center here in Montreal, the job has been amazing.  Its still a bit too much “public facing” for me, as we do get a few calls and I have to sometimes talk to customers, but for the most part I sit behind a desk and make sure their servers work, which is what I have always wanted to do.  Its been a huge learning curve though.  When I was with the Atwater Library and Computer Centre I was in charge of 3 servers: 1 Windows and 2 Linux.  Not much went wrong, so I didn’t get to feel that crunch of having to fix an issue in as a little time possible. But now that I am a Radical Support Agent providing support for hundreds of servers, there is a larger chance of something going wrong.  Everything from email issues to FTP issues to servers going completely offline due to catastrophic hardware failures. Needless to say, its stressful, but in a fun way.

In May of last year I took a trip back to Ottawa to see a good friend of mine, Danielle Allard, release her second CD, Chameleon.

This woman never ceases to amaze me.  I have followed her career for over 7 years now, and she is nominated for a 2016 FACES Award by Faces Magazine. While browsing the other nominees I noticed another familiar name – Alanis Morrisette, seriously… Danielle is now among the names of other famous singers… HOW FREAKIN COOL IS THAT!  I am so proud of her and how far she has come.

In October I signed up to be an Instructor at Udemy where I hope to soon publish my first course on creating a CentOS (Linux) based web server, quickly and securely. I of course didn’t realize how much of a challenge it would be. One of my first videos was of a 7 minute presentation.  It took me 45 minutes to record (thanks to my cat Snow Ball picking the most inopportune time to meow) and another 3 hours of post editing… So hopefully this new year will see me finish it sooner than later.

Well, January 1st marked the 4th year that I have been on the Island.  Yup, been away from my friends and family for 4 years now.  Although I have been out of Ottawa for almost 6 years now, I was never THIS far away.  4 years in a strange non english-speaking province… and yet I still don’t speak French that well.

But I must say I have spent no time at all being unemployed here despite the fact I don;t know the official language. This something I find interesting as I lived in Ottawa for 32 years and I never could keep a job more than a year (either cut backs, or job going out of business) and sometimes I spent months looking for a new job.  But here… I actually moved up from making minimum wage to working in my field in a position I have been waiting for for over 10 years.

Anyway, enough chatting… I hope to get more posts out, both technical and personal.  Although most of my technical posts will probably end up on my new site over at Servers Made Easy which is the name under which I am producing my Udemy videos.  I have done quite a few personal server projects over the last year that I want to educate others on how to do it… seeing as 90% of the tutorials I have found end up having the wrong information. I will post more about that later.  Till the, HAPPY NEW YEAR from ConsideredNormal.com