I am a big fan of MMORPGs (Mass Multi Player Online Role Playing Games) and am a recovering World of WarCrack (World of Warcraft) addict (well, not really, although I did enjoy the earlier versions of the game). Ever since I quit WoW, I have looked for something similar that can keep me enticed.

I tried getting back into WoW not too long ago, and found that they had pretty much killed the game, by that I mean its not as fun as it used to be. They’ve made it TOO easy to play… In the days before they released the Cataclysm expansion it was so much more fun. When you leveled up, you had to find your trainer and “pay” for new skills, now they just magically appear. It seems a lot of the stuff it automatically done for you, and all you have to do it point your mouse… Now when I play it, I am lucky if I even get to level 20 before I board out of my mind.

So since I lost interest in WoW, I have tried to find a suitable F2P (Free to Play) alternative that makes me feel the way I used to when I played WoW, a game that could keep me enticed. I have tried countless F2P MMORPGs throughout the last few years: Runes of Magic (Said to be the closed gameplay to WoW), Atlantica, Perfect World, Forsaken World, Age of Conan, Rift, Warhammer Online, Shaiya, Dungeons and Dragons, and so many more. The problem is most of them just aren’t exciting at all. I want to battle, I want excitement, I want the near death thrill of being in a battle long enough to see my HP (health point) approach 0. instead what I kept getting was quests where I had to find any number of NPCs (Non-Player Character) and chat with them, rinse and repeat, for hours… When do I get to go out and fight?

So the other day I found a game via Raptr, which, if you don’t already have it, I would recommend installing it. You can get some pretty sweet gear for other F2P games, which is in fact how I discovered Dragon’s Prophet, all be it the EU (European version) so although I did not qualify for the bonus, I still wanted to know what the games was about. 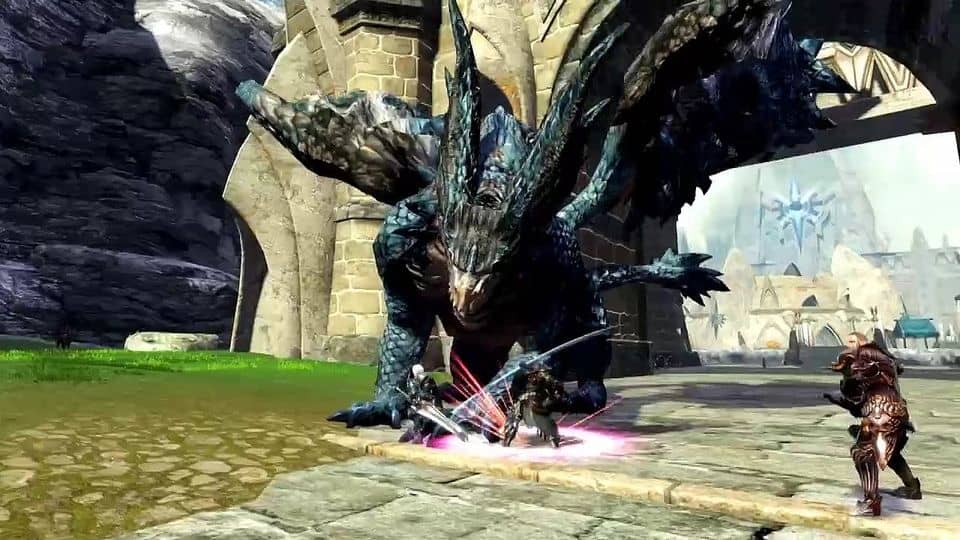 Although the game is fairly basic and is only in Open Beta (First release is set for Sept 18, 2013) the game is well thought out. Instead of putting all their effort into several races and classes (some games even have a dual class system) they decided to put all their effort in to what really mattered – game play. Lets be serious, how good is a Half-Ork rogue-mage when all he does it talk to NPCs all day… Dragon’s Prophet kept it simple, 1 race: Human, 4 classes: Guardian, Ranger. Oracle, Sorcerer. That’s it, 8 possible combinations (male and female) not 50 or 60. As a result I spent less time creating my character (Was still able to customize the look of my characters, and dimensions) and more time getting into the game.

Now being in Open Beta, things change, including spawning areas and quests, in fact if you look at the tutorial videos, they show you different area’s to spawn in, this has completely changed, but the game play, the meat and potatoes of the game, is still there… Right off the bat, you are in a battle, and very few of the quests are to talk solely to NPCs. And the best part? You can train most of the dragons you find in the game, mind you you only get 2 spots in the Dragon Stable (you can buy more, like every other F2P game out there, the extras cost real $$$) but you can fly ’em and ride em and they can help you in battle, each dragon (even in the same race) has different random skills that can help you out.

In short, I think I have finally found a game that reminds me of the old WoW days, a game that is exciting to play. So far I am a level 22 Ranger, with some pretty nice Dragons (although I have lost better ones, as I said the skills are random) and have played 2 dungeons instances. The giddy feeling I used to get playing WoW has returned. If you want a really good MMORPG experience, one that does not “Auto Move” you between NPCs and Quests, that does not have you running back and forth between NPCs learning about absolutely nothing. If you want an MMORPG that is fun to play, exciting, and non stop battles, then Dragon’s Prophet is the name of the game.